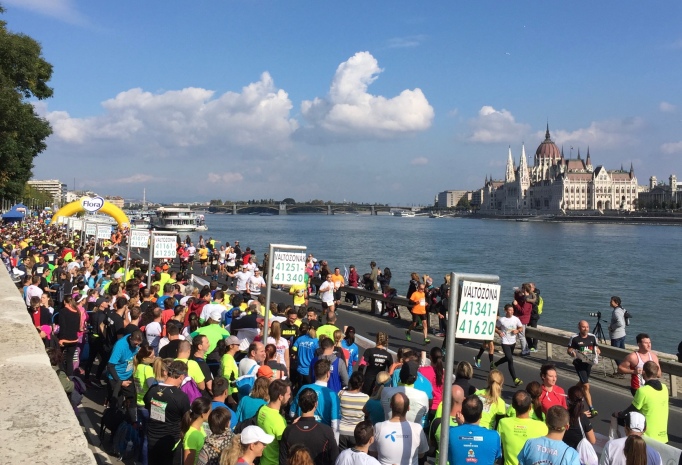 Budapest in her evening dress, looking north towards the Chain Bridge

PEST SIDE OR BUDA SIDE?

After our arrival and check-in to the Marriott on the Pest side of the Danube, we scurried to the deck off the hotel’s executive lounge for a glorious night view of the city. As travelers who enjoy sampling local delicacies and  wines, we know we have to walk our 10,000 steps every day, so we don’t come home looking like dumplings. Looking north up the Danube, we could see the walking paths on both sides of the river and the Chain Bridge and the Margaret Bridge, which would allow us to walk from the Pest side to the Buda side and back again. Looking south down the Danube, we saw going that way was an option too, with the Elisabeth Bridge giving us access to the Buda side. Which way to go?  Hmmm.  We decided to sleep on it and make our decision in the morning.

Budapest in her evening dress, looking south towards the Elisabeth Bridge

Sun up, walking shoes on, and itinerary chosen based on wanting to see the very impressive House of Parliament. Off we went, heading north.

Budapest in her day dress, looking north toward the Chain Bridge

A short distance from the hotel, we began our trek across the Chain Bridge after being assessed  by a pair of imposing lions. This suspension bridge, built from 1839-1849, was the first permanent stone bridge connecting Buda and Pest.  It is also the symbolic heart of the city, drawing legions of admirers to traverse .23 of a mile from one river bank to the other river bank. 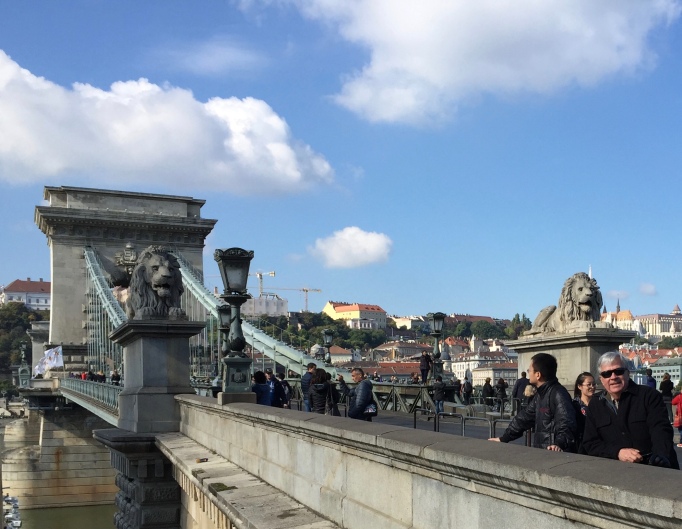 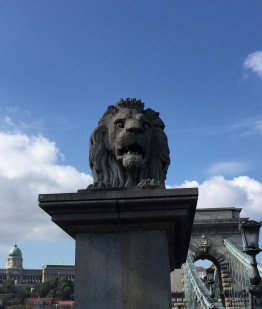 This particular day, there were literally legions of people, not just walking on the bridge, but also running on the streets. Budapest proclaims itself to be the “new running capital of Europe,” a well-deserved boast as evidenced by the over 27,000 runners representing 80 countries in the SPAR Budapest Marathon .  There’s a limit of 7000 for the marathon itself, but the other 20,000 people had a choice of entering shorter races: half-marathon relay for three; half-marathon relay for four; and  a 3,4 km fun run.  While the Danube is one of the most iconic rivers in the world, it paled in comparison this day to the river of runners in neon yellow, pink, and blue T-shirts. Happy colors.  People were joyful, especially at the start of the race, many wearing smiles that were as large as their strides.

Marathon runners on the Buda side with a view of the Margaret Bridge leading to the House of Parliament on the Pest side.

5000 STEPS TO THE MARGARET BRIDGE

We walked parallel to the river, putting a little extra bounce in our steps, motivated by the runners and the jaunty tunes the musicians along the route were playing. We took a right turn at the Parisian Neo-Baroque style Margaret Bridge, which opened in 1876. Walking  almost .4 of a mile across the bridge, we had completed more  than half of our 10,000 steps since we arose in the morning.

THE HUNGARIAN HOUSE OF PARLIAMENT

It’s surprising how many steps one can get in a large hotel before leaving for the day.  All steps count, but walking outside offers much more chance for serendipity than walking hotel hallways. Case in point:  The Hungarian House of Parliament. To the un-informed, this Gothic Revival building can be mistaken as a massive cathedral with its spires pointing to the heavens. While it is not a church, this “house of the motherland” is considered a holy building in a patriotic sense. The Hungarians had lost their independence in a hard two-year battle with the Austrians, which resulted in the forced dual monarchy of the Austro-Hungarian empire. Their national pride had not died in that battle, so in 1898 to celebrate Hungarian’s 1000th birthday, Budapest began the construction of several artistic buildings, including the Hungarian House of Parliament. It is a symbol of the new nation and one of the most beautiful buildings in the world.  Unfortunately, Parliament was not open for tours the two days we were in town. We could only look longingly at the beautiful facade and continue walking on by. 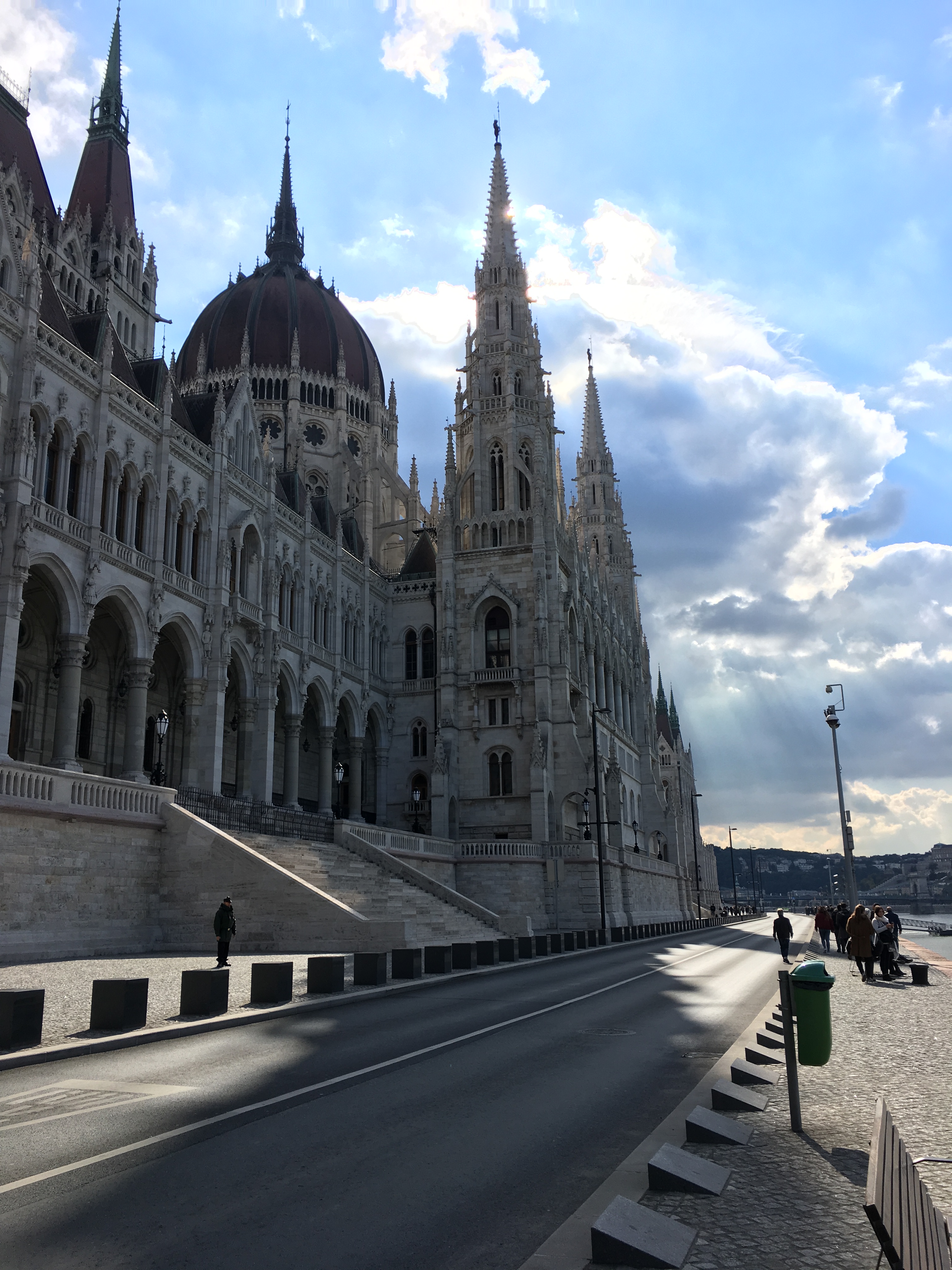 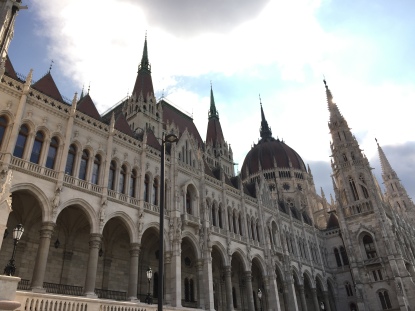 THE SHOES ON THE DANUBE EMBANKMENT

As we continued our trek, we ran across another unexpected find, but this was not serendipitous.  This find was sadly poignant, not happy. The Shoes on the Danube Embankment consists of 60 pairs of metal shoes set in concrete.  It commemorates the execution of Jews during World War II by a hateful anti-Semitic, pro-Germany group of Hungarian socialists.  A sign on site reads:  “To the memory of victims shot into the Danube by Arrow Cross militiamen in 1944-45.”  This moving memorial brings back to life those tortured innocents who were forced to the riverside, lined up with shoes removed, and then executed.  They die again and again as seen through visitors’ eyes. Gone but not forgotten.

Our steps to 10,000 now seemed insignificant compared to the steps to eternity we just witnessed, but we had no choice but to keep on walking.  We soon spotted the Chain Bridge which brightened our spirits with this view from the Pest side.

We were now close to the hotel, but had trouble safely crossing the street without getting run over by the marathoners We stood on the curbside with the locals, cheering on the intrepid runners. Finally there was a break in the crowd, so we zigged, then zagged, and finally crossed to the other side.  We were close to the hotel, had met our walking goal by this time, and un-expectantly met a familiar friend, a displaced celebrity from England. 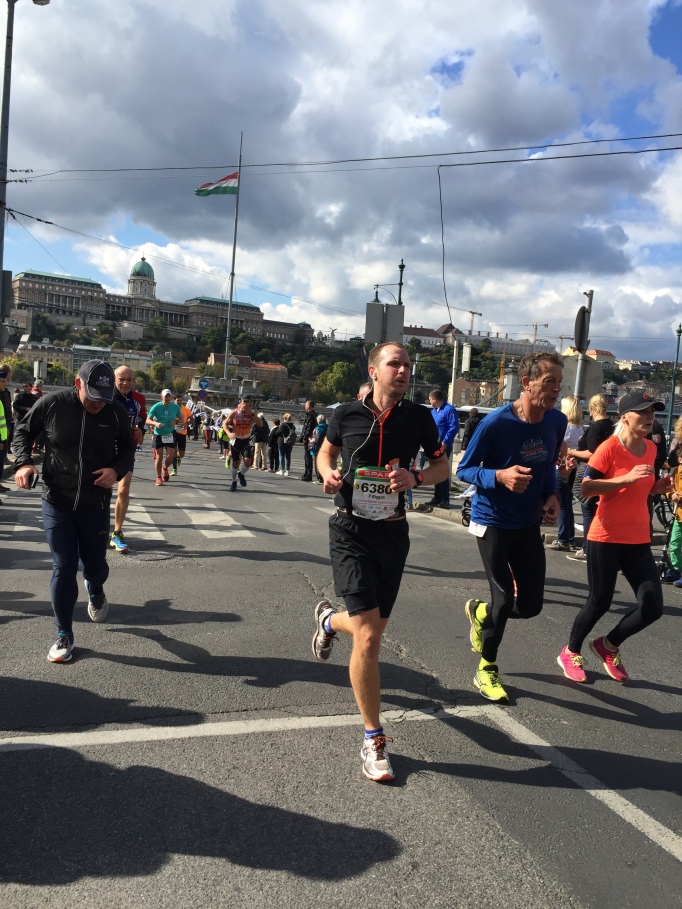 William Shakespeare himself was bowing to us and saying, “How dost thou, sweet lady and noble lord?”

Our answer was, “We dost fine. In fact, we dost more than just fine, walking 10,000 steps in beautiful Budapest.”

The Shakespeare Monument in Budapest