Not a lover of cold weather, I do not want to be in Duluth, Minnesota, in the winter.  The website 24 / 7 Wall St. lists Duluth as the fifth coldest city in our nation. The lowest recorded temperature is -39 degrees.  Brrrr!

Traveling to Duluth in the summer instead of the winter changes that “Brrrr” to a “Bravo!” My morning started pleasantly at Canal Park where my husband and I explored the Lakewalk, a pedestrian and biking path that meanders 7.25 miles along the shore of Lake Superior, otherwise immortalized by Henry Longsworth Longfellow as Lake Gitche Gumee, The comfortable 71-degree weather was partly cloudy with a slight breeze and not a shiver in sight.

Our research on the walk suggested that we start at either Canal Park or at Leif Erickson Park and the Rose Garden.  We chose the former, mainly because it was closest to our hotel.  We are glad we did because that site allowed us to view Duluth’s iconic landmark, the Aerial Lift Bridge. Unfortunately, we didn’t get to see this massive structure actually rise up to allow ships to sail beneath it. Fortunately, we can turn to YouTube, to see this magic of 20th century technology happen. 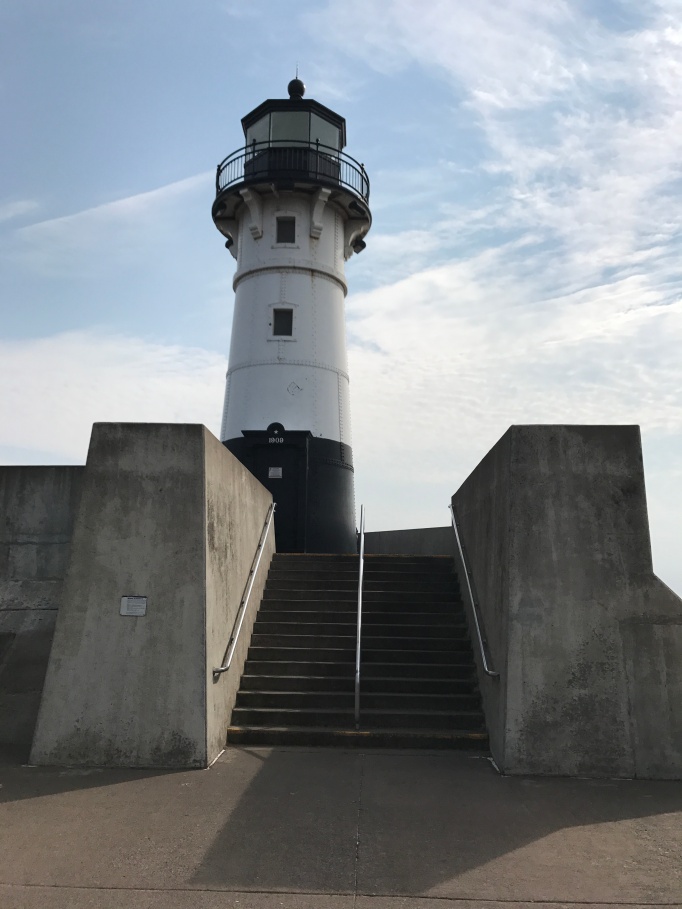 Also of 20th century technology, but not massive yet impressive never-the-less, is the 36-foot tall Duluth Harbor North Pier Lighthouse. Built in 1910, this working lighthouse guards the entrance to the Duluth Shipping Canal. Visitors who walk from the Lakewalk to the lighthouse pier and up the steps can see the lock on the door facing the lake. Unfortunately, no weathered lighthouse keeper greets them.  The last one served from 1928 to 1940; today, the lighthouse is fully automated.

Sights Along the Walk

There is never a dull moment on this walk.  In addition to the natural beauty of  Lake Superior, there is a series of  ancient anchors in repose along the shore. 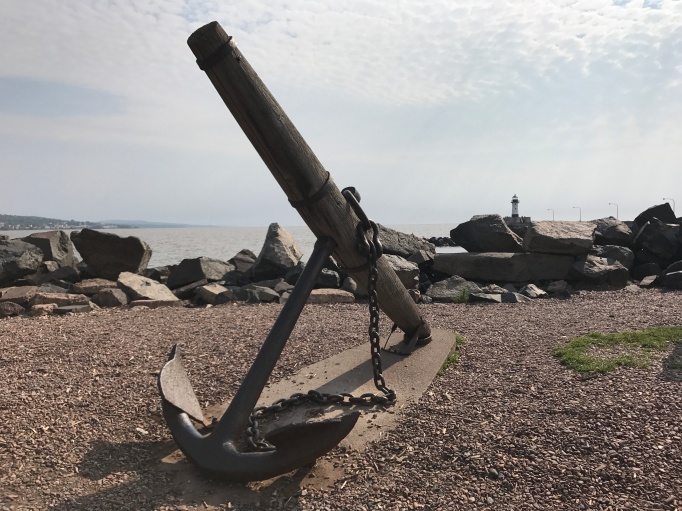 One of several anchors along the shore

In addition, if you can’t find the banned locks of love on Paris’s bridges any more, you can find them on Duluth’s pier posts.

Sculptures also enliven the area.  Some are in front of shops,  a few blocks from the Lakewalk, 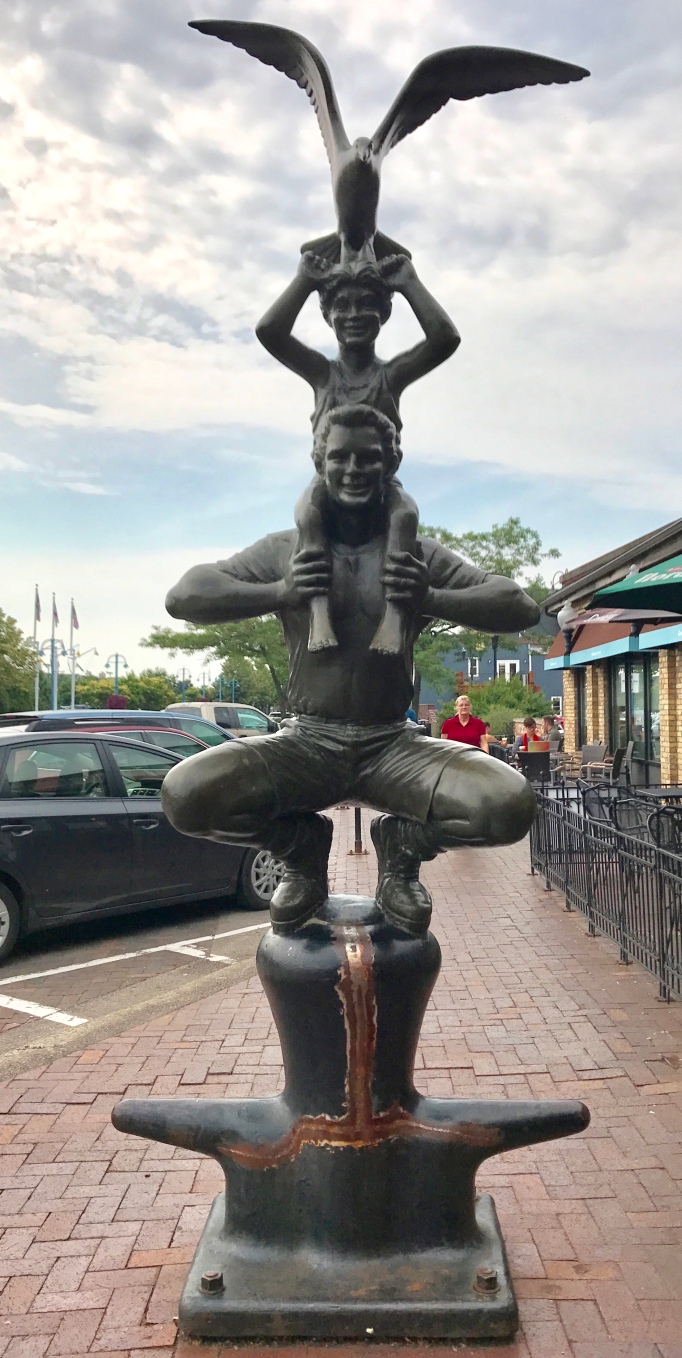 A sculpture celebrating family fun in the great outdoors

while others require you to exit the Lakewalk on strategically placed steps.  Unfortunately, we didn’t have time to explore this option.  If we had exited at Lake Place, we would have found Sister City Park and Enger Park and the sculptures gifted by Duluth’s Sister Cities. At the former park, there is The Green Bear from Petrozavodsk, Russia, and The Stone from Växjö, Sweden.  At Enger Park, we would have heard the mellow tones  of The Peace Bell, a gift from Ohara Isumi-City, Japan.

Exiti the park at Lake Place to find the Sister Cities’ sculptures.

We retraced our steps 1.5 miles back to the car, which we parked in one of the many lots in Canal Park, an area that prior to 1985 was a rusting industrialized area whose waterfront was shut off to the public.  Visionaries have revitalized Canal Park into a vibrant venue that attracts nature lovers, sports enthusiasts, gourmets, and art afficiandos.

The walk back to Canal Park

We relunctantly left the Lakewalk, but the serendipity continued. My favorite find was a fanciful fountain that spouted a lively spray on a sliding water nymph. 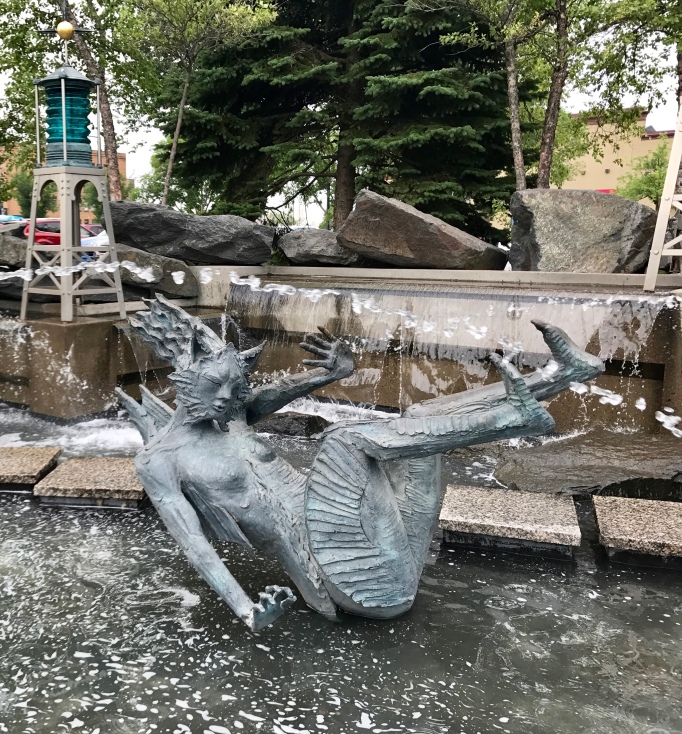 A fountain of fun

Another surpise was a brick wall that heralded the work of sailors, past and present, reminding us of the influence of the maritime industry on Duluth’s cultural heritage.

If walls could talk, what would these mariners say?

‘There are ample opportunities to both walk and shop until you drop. The revitalized waterfront also hosts a bevy of restaurants and shops from the familiar, like Cold Stone,  to the unfamiliar, like Antique Boutique. 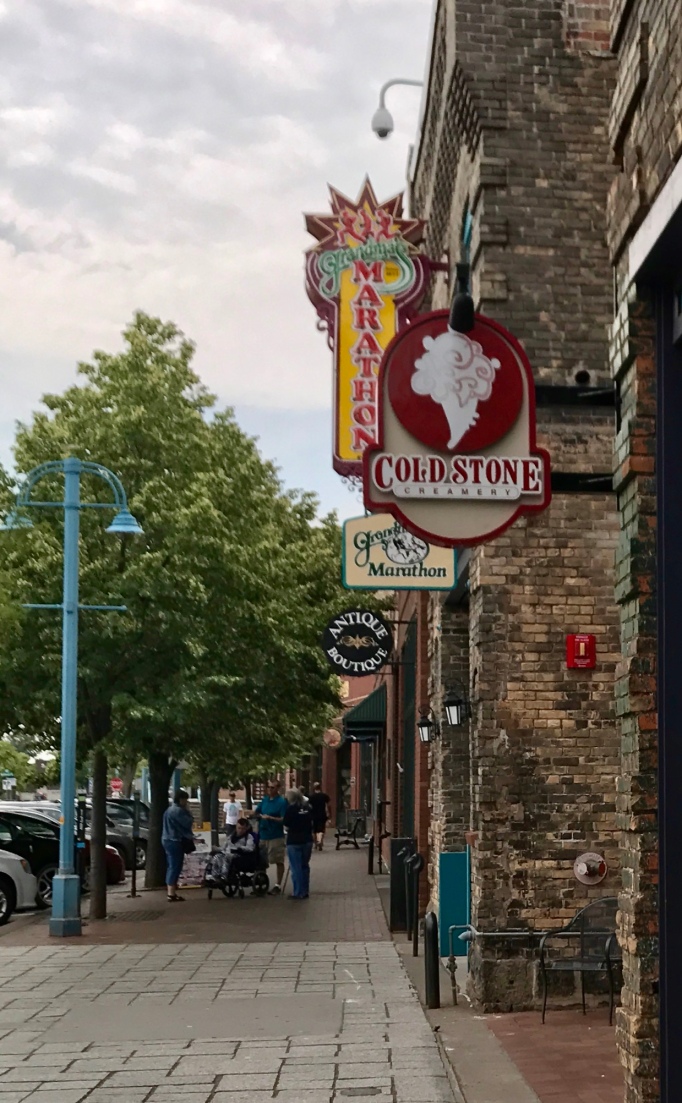 Arriving back at our car, I noted that according to my Fitbit,  I had walked three miles roundtrip, which leaves almost six miles of the walk yet to explore. There is nothing left to say except the obvious:  “Bravo to Duluth!” We will return.