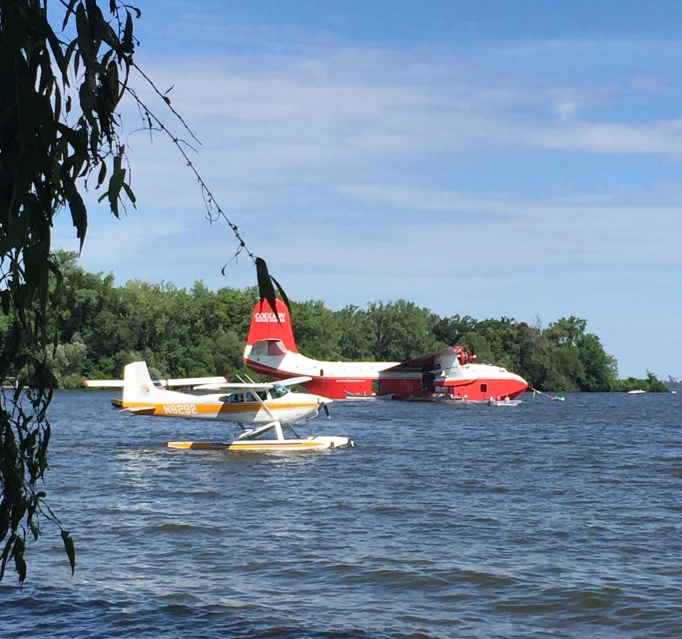 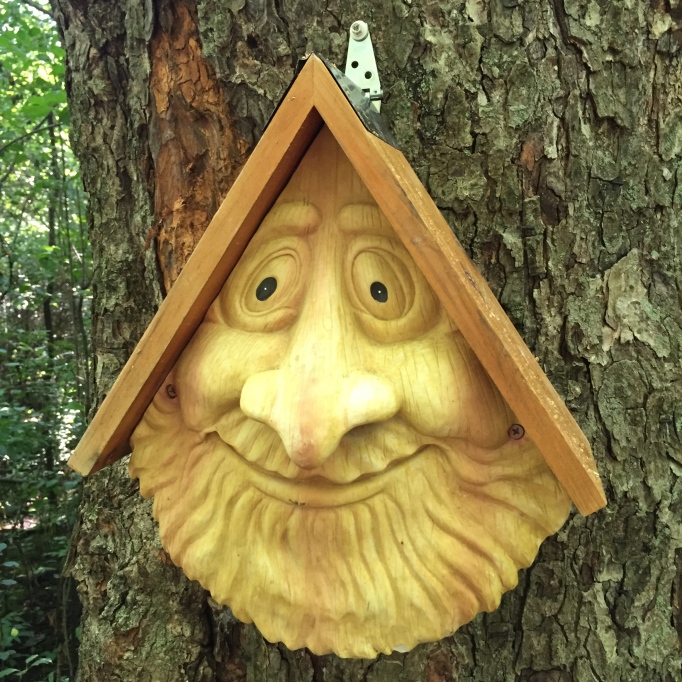 SITES AT THE SEAPLANE BASE

Come see what I saw on our last day at AirVenture 2016.  We checked out of our delightful B & B and headed a few miles down the road to the Seaplane Base.  People from all over the world visited the site and marked their hometowns on the map below. 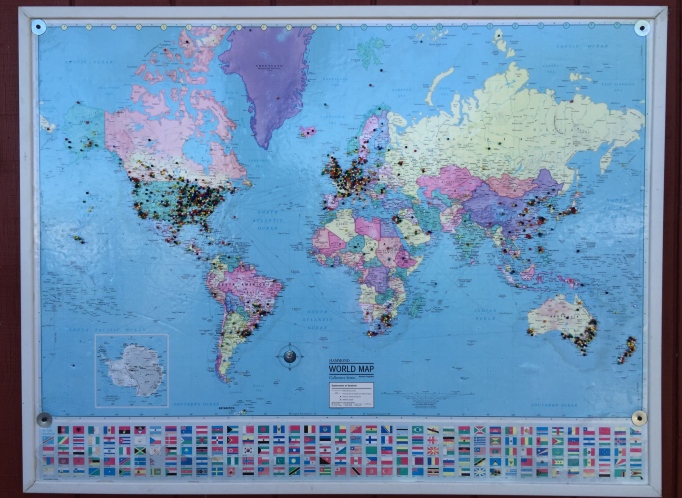 We found the Seaplane Base to be an idyllic location, one that you could fly to and then camp at if you wanted. Many people took that option, but what was the big draw this year?  What attracted so many, from so far away? 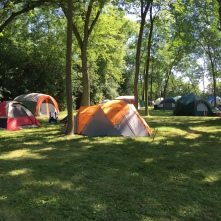 Answer:  The Monster of All Flying Boats–The Mighty Martin Mars!  This behemoth, owned by the Coulson Group, is the world’s largest flying boat to be flown operationally. This aircraft, one of five built at the end of the World War II, first served as a troop transport by the U.S. Navy for several years. One of the aircraft was destroyed in a fire, and the other four were then sold in 1959 to a British Columbia forest consortium and converted to fire tankers. Two out of the original four planes had long stints fighting forest fires. The other two had accidents that permanently grounded them.

Kermit Weeks, the owner of Fantasy of Flight Museum in Florida and the largest private collector of aircraft in the world, was part of the crew flying the Martin Mars from Vancouver Island to Oshkosh’s Lake Winnebago.  Weeks felt that the aircraft is so special that he told the local news station that he “. . . believe(d) I’m being part of history” especially since he had his “doubts on whether the airplane will continue flying.” Weeks put his money where his heart is because the local news also reported that he bought his seat on the flight deck by paying the $40,000 fuel bill for the eight-hour flight. Like Weeks, Martin Mars fans came great distances to view this massive machine. 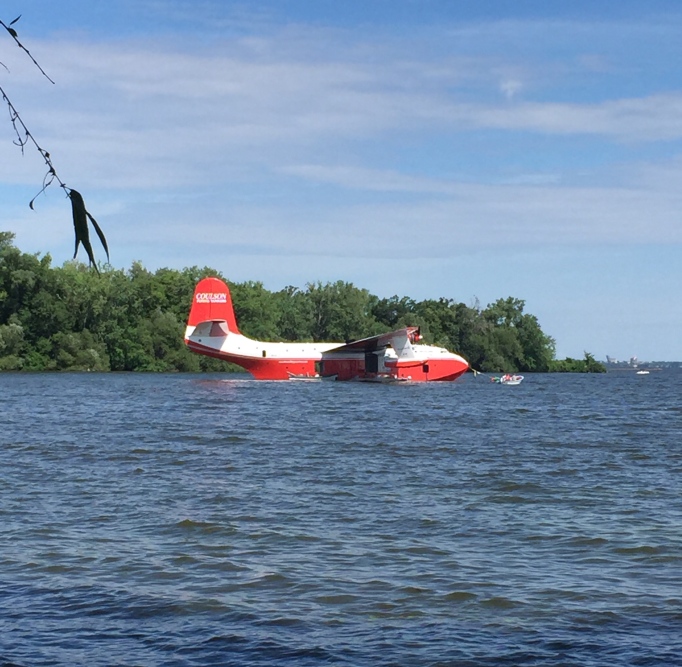 PROBLEM ON THE LAKE

Some flew close to the aircraft to get an up close and personal view, while others on the shore were artistically inspired. We all looked forward to the promised tours of this historical flying boat.  One problem: Where were the boats taking fans out to the Martin Mars? 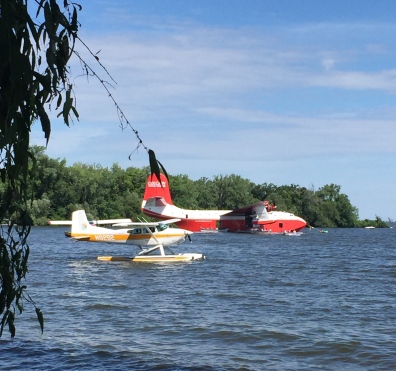 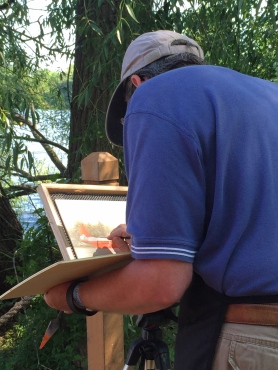 Oops! The flight crew had an engine issue when taking off on the lake. They made a cautionary landing in shallow water, which poked a hole in the hull.  No tours today! 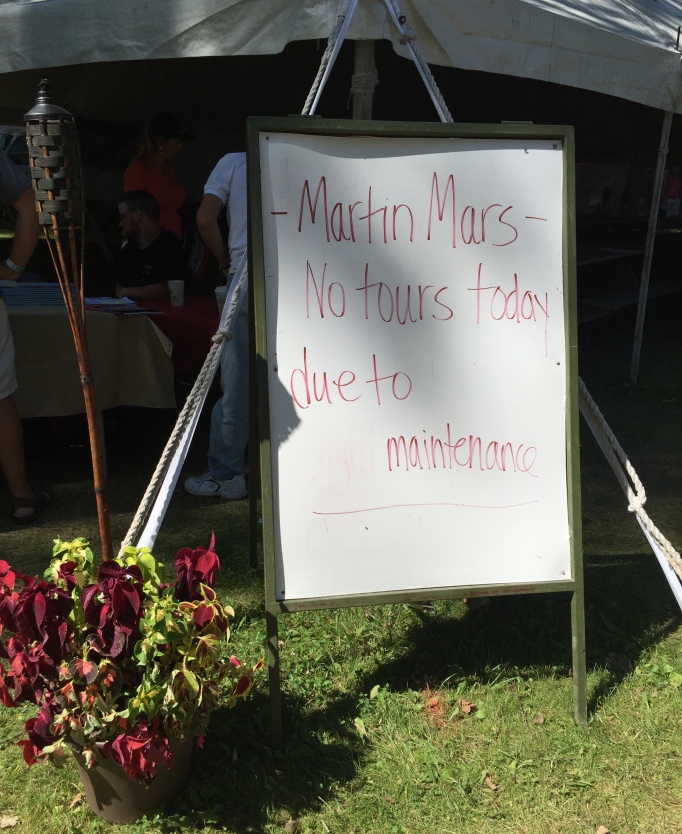 HANDSOME IS IN THE EYE OF THE BEHOLDER

We then found other things to do.  My favorite was the meet and greet session with the  pilots from the Canadian Geese Flying Team. These handsome guys were straight out of central casting:  drop-your-jaw gorgeous.  (Or maybe I was just tired of looking at airplanes all week!)  My husband obviously didn’t share my sentiments about needing a change of scenery because here he is admiring a Searey. 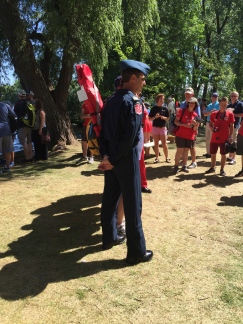 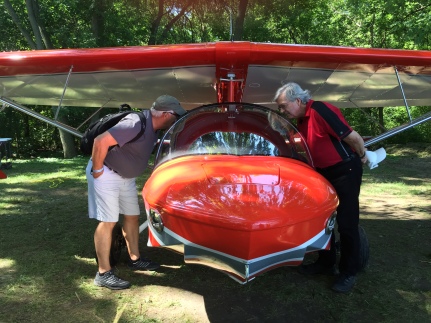 HUMOR AT THE BASE

We noticed we had other options for entertainment too as we strolled by “Naka Beach.” Everyone else strolled on by too, so nothing scandalous to report here. 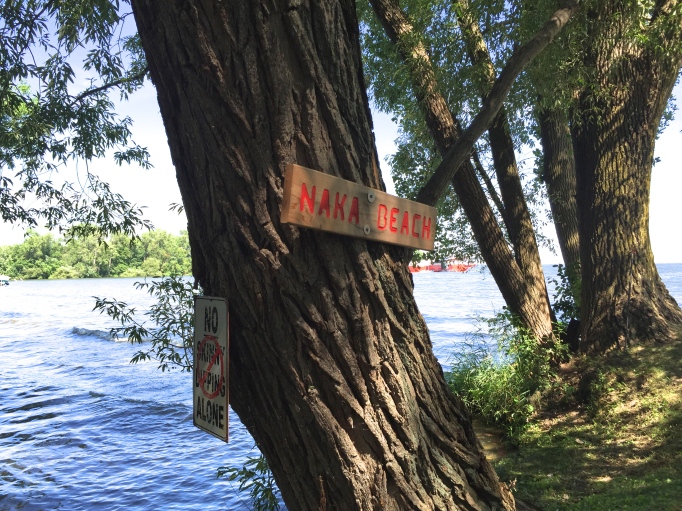 I will report that seaplane pilots obviously have a sense of humor. 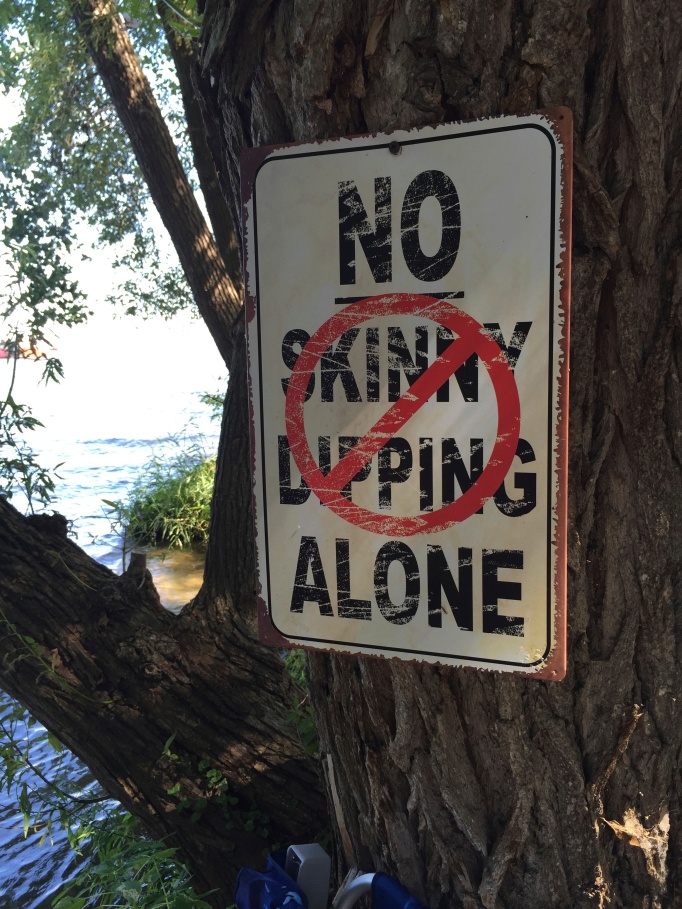 WHICH WAY TO GO?

Our time is finished at AirVenture 2016, and in case we hadn’t gotten our aviation fix, the sign post below points to other aviation sites to explore.  We are sated, so we don’t take a detour.  Instead, we are off to Milwaukee to catch our flight home.  We had a fun time playing with airplanes, but that fact didn’t hold true for the trip home. We got stuck in Atlanta overnight, but I am not going to share those details. Why end a happy story with a horrific conclusion? 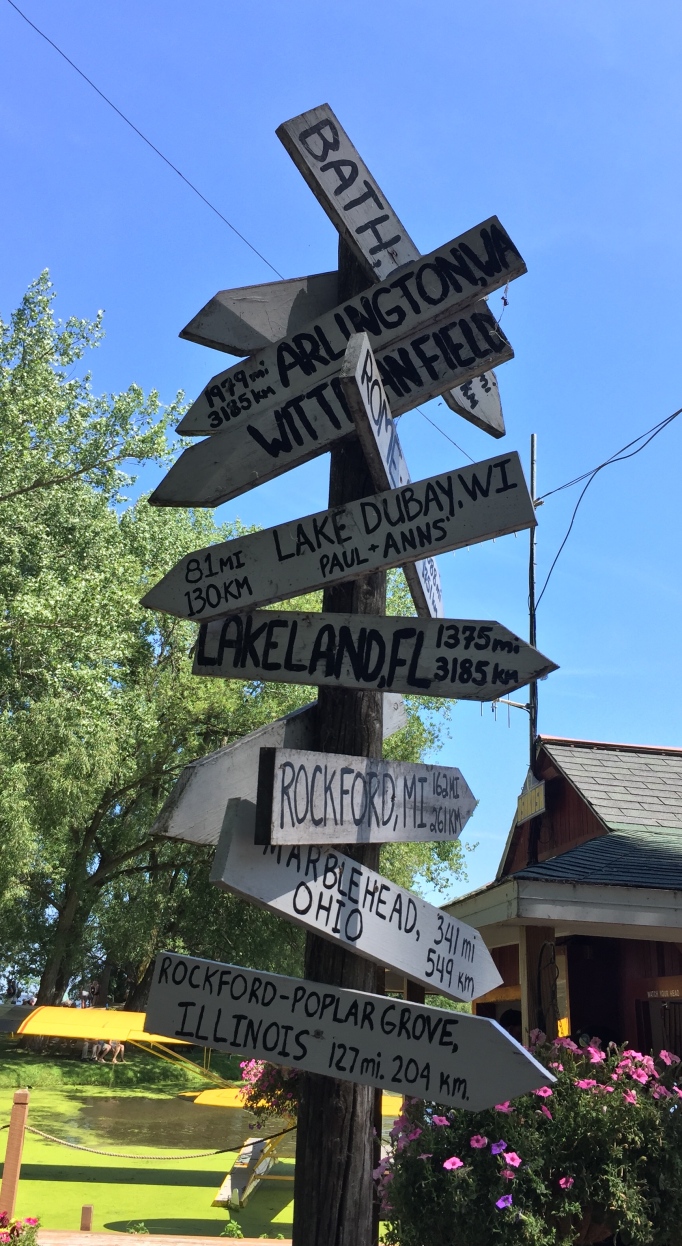 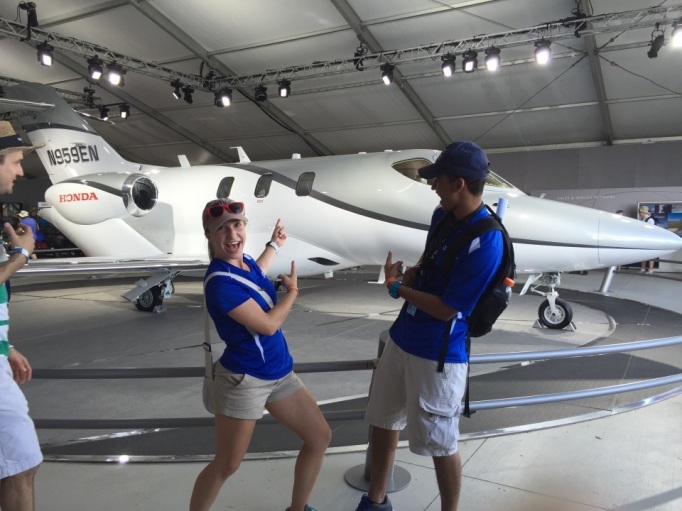 My husband and I have just flown in to the largest gathering of airplane enthusiasts in the world: EAA AirVenture 2016 in Oshkosh, Wisconsin.  This is a place where industry icons, astronauts, military and civilian pilots, engineers, scientists, entrepreneurs, movie stars, Joe and Joy Homebuilders, and aviation lovers from here and abroad come together for a week of show and tell.

THE HAPPIEST PLACE ON EARTH

During this time, Disney World can no longer claim to be the “Happiest Place on Earth.”  AirVenture is.  I know I will be seeing three-quarters of a million people grinning, laughing, ooo-ing, and ahh-ing in an explosion of happiness.

You doubt what I say because Disney has theme characters, and AirVenture does not? While there is no Mickey here, Kermit is, Kermit Weeks, that is, whom Forbes calls the “most prolific airplane collector in the world.”  Kermit will be taking paying customers on the ultimate thrill ride: a flight in the Martin Mars, a 38-foot-high and 120-foot-long flying boat guaranteed to generate some big smiles.

Now you are thinking that Disney has princesses with special powers, and AirVenture does not.  Wrong again!  Some of the bravest princesses in the universe will be challenging the laws of gravity and thermodynamics by performing loopy looping, twisty tumbling, and tickly treetop maneuvers in their aerobatic airplanes.  Another princess wil take a wild walk on the wing of a Grumman bi-plane.  There will be a score of handsome princes flying too, some in spectacular displays of smoke and pyrotechnics. There will be no sad faces this week.

Are you still doubting the happiness factor of this event because there are not enough attractions? Consider the following:

I dare you to come and experience EAA AirVenture and not find it to be the Happiest Place on Earth.  Now it is time for me to go to bed and get a good night’s rest to be ready to explore the festival tomorrow.”Good Night!” I say with a smile.